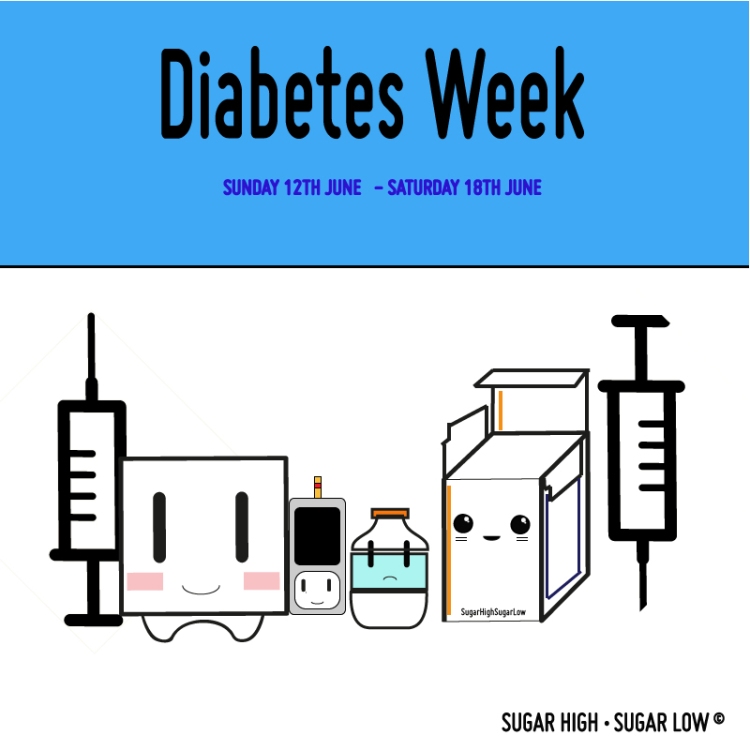 This week marks the beginning of Diabetes Week. This year the main focus is on, the misconceptions people have in terms of what diabetes is and how it affects individuals. The number of people with diabetes has risen from 108 million in 1980 to 422 million in 2014.

There are many myths which surround diabetes, that make it hard for others to believe how deadly diabetes can be. Stereotypes and stigmas have created an inaccurate image of  what the condition really is. As a diabetic blogger, I feel the responsibility to spread the correct message to my readers.  Let’s start by setting the message straight about the different types of diabetes that can occur.

There are many types of diabetes, the main types include; type 1, type 2, gestational diabetes and MODY (Maturity Onset Diabetes of the Young). Diabetes is a long- standing condition that affects the body’s ability to process glucose (sugars). All these types cause blood glucose levels to increase. Glucose levels are high due to the body’s inability to use the glucose properly.

This occurs because the pancreas either:

Therefore glucose is not able to enter into the cells and remains in the blood stream.

Type 1 is an autoimmune disorder, which occurs due to the body’s immune system attacking and killing beta cells (insulin cells) in the pancreas, where they are made. The reason why this occurs still hasn’t been discovered, however there are researchers constantly working to find out this very reason. This autoimmune disorder is usually diagnosed in children but can also affect people up to the age of 30, resulting in no insulin being produced. People with this condition learn to use insulin therapy to manage their diabetes.

Type 2 diabetes is the most common type of diabetes. It occurs due to insulin resistance, where the pancreas either does not produce enough insulin or the insulin that is being produced does not work properly. Type 2 diabetes for some people can be managed through diet and exercise. Some people also need medication to manage their blood glucose levels/ diabetes.

What is this type? MODY stands for Maturity Onset Diabetes of the Young. This type of diabetes is quite different from both Type 1, Type 2 and gestational diabetes. It is strongly present in families and is triggered by a mutation in a single gene. If a person carrying this gene has a child with a person who doesn’t carry the gene, then any children they have will have a 50 % chance of inheriting the gene. If a child inherits this gene they will then go onto develop MODY before they reach 25 years old, whatever their weight, lifestyle or ethnicity. These diabetic also don’t necessarily need to take insulin either.

It’s extremely important to know if you have any of these MODY types. If treatment is needed then you can then get it. Also if you have the gene, there is a 50 % chance that you could then pass this gene onto your children. Therefore genetic testing usually is extended to other family members.

I hope that this has helped you to understand the different types of diabetes that can occur.  For more information on the prevalence of diabetes and also if you want to help to spread the correct message, then click the links below.

Thanks for stopping by friends